Movistar Yamaha MotoGP‘s Valentino Rossi showed once again you should never count him out for the race, regardless of his starting position. He displayed a competitive pace aboard his YZR-M1 throughout today’s entire Grand Prix de France, to take a strong third place on the podium. Maverick Viñales scored solid points with a seventh position result at the end of a challenging weekend and took over second place in the championship standings.

Rossi had a brilliant start

Rushing from ninth to sixth place in the first corners. An early faller moved the Italian up another spot as he settled into the leading group. He subsequently lost a place to Danilo Petrucci, but moved back up to fifth when Andrea Dovizioso crashed out of the lead.

Johann Zarco also fell victim to a lack of grip, allowing Rossi up to fourth. The Doctor could smell a podium result and picked up the pace, soon taking third position from Jorge Lorenzo. He set a provisional fastest race lap of 1‘31.426s with 13 laps to go, eager to close the gap to Petrucci and kick off a fight for second place, but the Yamaha-rider wasn‘t able to get close enough. He crossed the line in third place, 5.350s from the front. 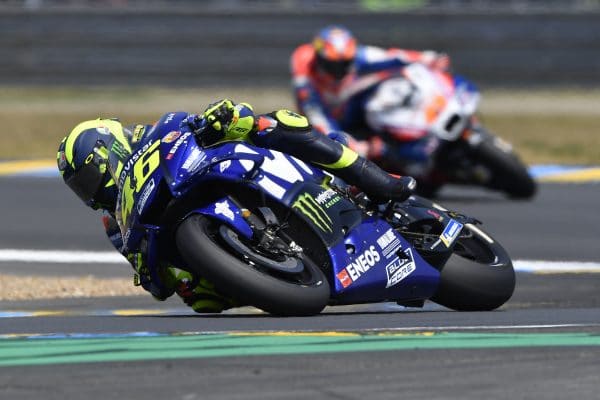 Not easy for Viñales

Viñales struggled to match the pace at the start of the 27 lap race. He was in 11th place after the first sector, but was eager to keep up with the front-runners. He briefly moved up to ninth when a lack of grip cost him four positions. He had his work cut out for him, riding in 13th, but the Spaniard is no slouch. He gradually started to pick up places and snatched ninth as he became more daring on the soft front and rear tyre.

On a second wind, he started to consistently clock 1‘33s-low times to reel in Alex Rins. On lap 19 and 20 he swiftly moved past him as well as Aleix Espargaró for seventh place, thus fuelling his motivation to keep fighting. He put in a personal best lap of 1‘32.871s with two laps to go, but the margin to Lorenzo was too big to bridge. The young gun took the chequered flag 23.758s after the race leader but earned some valuable championship points.

Viñales‘ seventh place moves him up to second position in the championship standings with 59 points, 3 points ahead of teammate Rossi, who climbed up to fourth position. The solid results keep Yamaha in second place in the Constructor Championship with a 28-point margin to first, while the Movistar Yamaha MotoGP Team dropped to second position in the team standings and now have a 9-point gap to the top.

Movistar Yamaha MotoGP will be back in action in two weeks‘ time at the team‘s and Rossi‘s home Grand Prix, the Gran Premio d‘Italia Oakley, held at the Autodromo del Mugello from June 1st – 3rd. 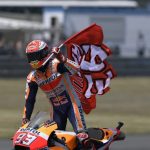 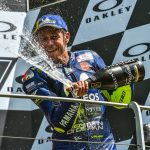 Rossi scores 3rd at Mugello, climbs to 2nd in the ChampionshipMotoGP
At RTR Sports Marketing we use cookies to bring you the best site we can. If you're cool with that, click OK. Or to find out more, read our Cookie Policy.OkCookie policy