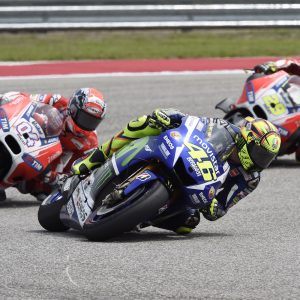 After a stunning victory from Valentino Rossi in Argentina a fortnight ago, the Movistar Yamaha MotoGPteam flies back across the Atlantic Ocean to Europe for the Gran Premio de España at the Circuito de Jerez this weekend.The Doctor arrives in Spain excited to add another top finish to his list of successes achieved in Argentina, Texas and Doha. Over the first three races he scored two sensational wins and a third place. He currently leads the championship by six points and is confident he can continue his momentum in Jerez. Rossi has claimed six premier class wins at this circuit in 2001, 2002, 2003, 2005, 2007 and 2009, two second places in 2008 and 2014, and a third place in 2010.Jorge Lorenzo is also looking forward to putting on a show in front of the Spanish fans. The four-time World Champion holds fourth place in the championship standings and has an impressive record at Jerez, with two premier class victories in 2010 and 2011, a second place in 2012, and two further third places in 2008 and 2013. Last year saw him finish just off the podium in fourth place.Circuito de Jerez is one of the most popular MotoGP venues, not only amongst riders but also fans, who travel from all over the world to see the action. The track was built in 1986 and hosted its first Grand Prix one year later. Blessed with consistently good weather and beautiful scenery, this track is usually filled to its full capacity, giving the event a great atmosphere. The 4.423km circuit sits within a slight valley that serves as a natural amphitheater, allowing race fanatics not to miss any of the overtakes that are bound to happen in the multiple fast corners and hard braking points.

“I’m very happy to come back to Europe! These first three races have been very positive, although some of these circuits are not my favourites nor of the Yamaha! Yet my YZR-M1 has behaved very well and we rode nice races! To go to Jerez, after the victory in Argentina and holding first place in the championship, is certainly very positive. However the most important thing is that we’re doing a great job with the guys of the team. We must continue to work well together. The championship is still very long! I feel good and returning to Europe is nice. I really like the Jerez GP. The track is beautiful and also the atmosphere is fantastic. It also has very fast turns and I like that a lot. I did good races at this circuit in the past and I’ll try to have a good race also this year!”

“After the three first races of the championship I have to say that, though the results weren‘t as I expected, this season is still long, so we are very focused on working hard and trying to get better results from now on. During last week I was able to train a lot. In front of us is the GP in Jerez, one of the most challenging races of the year and it‘s also one of the most exciting, because of the atmosphere. We come back to Europe and Spain and I like that. I look forward to racing there in front of all the Spanish fans and I will do my best to try to get my first podium of the season. The track is really nice and I hope to do a good job with my M1.”