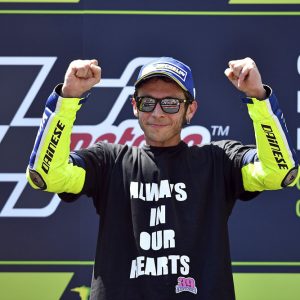 Jorge Lorenzo also set a strong pace over the first stages of the race, but he was unable to hold his lead due to front tyre grip issues. Riding in fifth place, he was looking to take home vital points for the championship, until Andrea Iannone clipped him and caused a DNF for them both.

Starting from fifth on the grid Rossi had his work cut out for him as he dropped back to eighth when exiting the first corner. The Doctor immediately put his nimble YZR-M1 to work and carved his way through the pack like a knife through butter. By the end of the first lap he had overtaken Hector Barbera and Andrea Dovizioso. Riding in sixth place as he crossed the line for the first time, Rossi moved on to his next targets, Maverick Viñales and Andrea Iannone. He overtook the both of them with a great manoeuvre and quickly passed Dani Pedrosa to earn a spot in the top three with still 22 laps remaining to reel in the front riders.

As he pursued Marc Marquez, the Italian quickened his pace setting a fastest lap of the race so far. He soon reached the back of his rival‘s bike and smoothly passed the Spaniard on lap six and swiftly moved on to pass his teammate to take over the lead on the very next lap. Now with a clear track in front of him, he put the hammer down, but he was unable to shake off Marquez, who was riding in second place.

The end of the race saw a brilliant fight between the two key protagonists. The local rider made a move in turn five, but Rossi was quick to respond with a brilliant move in turn two a lap later. Marquez used the slipstream to find a way through again, but Rossi fought back. With two laps to go the Italian was in Marquez‘ slipstream and needed no second invitation when the Spaniard left a gap on the penultimate lap in turn seven, allowing Rossi to make the race-winning pass. Marquez was unable to make up the lost time, while Rossi rode towards his second victory of the season, holding a 2.652s margin over the finish line.

Lorenzo had a lightning fast start from second on the grid to take the holeshot. He rode the early stages of the race exactly as he had planned, increasing his lead to over 0.7s by lap two, whilst the 20 riders behind him tried to sort out their order.

The Mallorcan rider pushed hard, but was unable to completely break away from Marquez in second place and his fast approaching Movistar Yamaha MotoGP teammate. He was forced to let the pair go past with 19 laps to go as he struggled to find grip on the harder front tyre. Lorenzo tried to make his Yamaha as wide as possible, yet Pedrosa also found his way past. He was then put under pressure by Viñales. A hot battle followed, with multiple overtakes from both riders, but in the end Lorenzo was unable to stick with his compatriot as the grip-level of his tyre was too deteriorated. The Spaniard then cleverly focused on collecting as many points as possible and was determined to keep Andrea Iannone at bay, but then disaster struck. Nine laps before the end Iannone ran into the back of Lorenzo‘s bike whilst entering turn ten, thus ending the race for both riders.

Rossi‘s first place earns him 25 points. This result keeps him in third place in the championship standings on 103 points, now just 12 points behind Lorenzo in second position.